A Busy Month Ahead…

Broadcloth has an exciting month ahead of us, which I (Adam) am incredibly stoked for.

Next week, we’ll be strolling out to Boston on May 25th for a return to Outpost 186. Our set there last September was a real blast and we played for a small but dedicated crowd, and having all made a few connections in the city since then, we’re quite excited for our return. That date will feature some guest appearances by some locals in the Boston improv/new music scene, and we are always excited about collaboration.

Two days later, we’ll be heading down to Brooklyn for a show at I-Beam, on Friday, May 27th. We’ll be sharing the bill with a really unique and fabulous duo Architeuthis Walks on Land, consisting of Amy Cimini (viola) and Katie Young (bassoon). Their recent disc “Natura Naturans” has been getting great press, and I feel like their sound is quite sympathetic to ours. I’m really looking forward to that date.

Two days after that, Sunday, May 29th, we’ll be in New Haven performing at the mostly noise/punk venue Popeye’s Garage on a bill consisting of a good deal of improvised music. The bill will also feature guitarist Bill Nace collaborating with the Jookla Duo (sax and drums), hailing from Italy, as well as a Mittimus, a subgrouping of the Hat City Intuitive, an improv/jazz/noise collective. This is sure to be an excellent night of music in New Haven.

That weekend, we’ll be heading to Gowanus for a small show in a venue known as “The Home Of,” which will also feature a set by electronics artist and composer Sam Morrison, as well as a third set of collaborative improv with Sam and a few locals. Visit http://thehomeof.org for further details, including an address.

The following weekend, we’re glad to be hosting Prehistoric Horse in New Haven. That trio, featuring David Grollman on percussion, Valerie Kuehne on cello and Lucio Menegon on guitar, borders between free improv and harsh noise, and their sound is truly wonderful. The venue is the John Slade Ely house, and we’re pleased to announce that the show will be 100% free, so take this opportunity to coerce a friend or loved one into checking out some new music! (bring cash for merchandise and refreshments, which will be served.

Prehistoric Horse will be returning the favor by hosting us in Brooklyn on June 24th as part of cellist Kuehne’s Super Coda series, which that weekend will be dedicated to a weekend of cello music. Further details pending – and if you live in the Brooklyn area, and wish to support the Super Coda series as well as Café Orwell which hosts it, please consider checking out the Kickstarter campaign to support soundproofing the café here: http://www.kickstarter.com/projects/827158541/keep-the-super-coda-living-through-creative-soundp

Finally, I’m also quite pleased to announce that Broadcloth has done one of two planned recording dates with Doug Slawin at St. Peter’s Episcopal in Milford, CT. The room has great, extremely flattering acoustics for our group, and we’re excited to be gearing up for a proper debut sometime soon. In the meantime, keep your eyes peeled for the full audio of the Big Room set we’ll be releasing shortly…

Hope to see you out there soon!

I guess the major trouble with having Bandcamp embedded as your music page is that you can’t have any place besides a news post to have stuff hosted on any other such services. Rah rah rah. Here are a few select tracks from the four nights of our recent tour. Most are from the last show, at Pyramid Atlantic, as there was a good deal of crowd noise at the other two venues and another audience member recorded our Philadelphia show. The final piece is from The Wind-Up Space in Baltimore, and is a collaboration with experimental turntablist Erik Spangler, which was loads of fun.

Finally a small fragment of our show at The Big Room:

All in all we’re feeling pretty good about ourselves, the Big Room show representing to us a culmination of a week’s worth of solidifying as a group, adapting some, and solidifying again. Consider our birth pangs to be over. We expect to put up select pieces of audio from the tour on Soundcloud and quite possibly a digital release of the Big Room show, a room that has flattered us with its acoustics before, evidenced by “Elastic” and “Selkirk’s Coronation” on the tour compilation, both recorded there last May.

After the shows we announced for may, we have a few shows in the works for June as well – June 4th at a recently started Experimental Music series in Gowanus, Brooklyn (details TBA). June 10th, we’ll be hosting the trio Prehistoric Horse, a fierce, noisy improv trio of guitar, cello and percussion – again, details TBA. Later that month, they’ll return the favor and have us on cellist Valerie Kuehne’s Super Coda series either June 24th or 25th, details again TBA.

Thanks one and all who came out and helped make the past week of shows a true blast. Telegraph in New London, CT gave us a good chance to warm up for tour, giving us a chance to test out some of the ideas we’ve been working at a great deal since our last show in January. We had a great run of shows for our mini-tour, taking us to Philadelphia for a house show, Baltimore for a venue inspired by Twin Peaks and David Lynch called The Wind-Up Space, Lancaster, PA for an art exhibition, and Washington D.C. at Pyramid Atlantic for an experimental music series. Each show produced a slightly different feel, and the effect of playing four successive shows like that gave these compositions and improvisations a tremendous immediacy.

Coming up will be a show this Friday, April 8th at The Big Room in New Haven, CT. We’ll be doing two sets, one more focused toward recent compositions of ours including an excerpt of a chamber opera by Adam, a new embroidered piece by Anne, and some additional compositions by the three of us. The second set will be more focused towards improvisation. Show begins at 8PM, and tickets are $10. The address for The Big Room is 315 Peck St, New Haven, CT.

Later on, we’ll be returning to Outpost 186 in Cambridge, MA, on Wednesday, May 25th, and then Friday, May 27th we’ll play at IBeam with additional sets TBA. Details on those forthcoming.

We made recordings of most of our performances from the tour, so excerpts will be uploaded at some point soon.

Finally, we should be solidifying plans to record our first full length soon. We’ve all gotten extremely busy somehow over the next several weeks so our plans to tack the recording on at the end of tour has unfortunately had to be scrapped. Suffice to say that we’ve got enough material circulating in the complete or “near-done” phase that we should be able to effectively keep the momentum working for us. 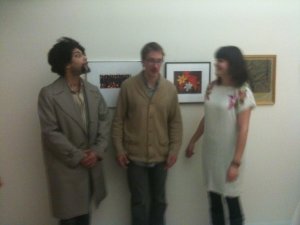 Hello and welcome to broadclothtrio.com, the official web home of the free improvisation and new music trio Broadcloth. The site is intended to be a catchall place for all the miscellaneous info of the group kicking around on the net – in the blogs of each of its members, and variously on Facebook, Myspace and Bandcamp. So the theme here is just to unify that effort as much as possible.

Please check out the Performances tab for info on our upcoming shows, including a small mid-Atlantic tour (so-called) that will take us down to DC and back within 4 days. Check out our Music page for a preview of the upcoming Tour Compilation, which will be available in hard copies only at the various stops on the tour. Each hard copy will be hand made and assembled. Upon returning from tour the whole compilation will be posted online for free/P.W.Y.C.

Our About page will feature the latest bios of the group members, our Videos page which rounds up some of the various documentation we’ve been lucky enough to round up through various performances, and our Links page will be the great dispersal for artists we appreciate, have played with, recommend, etc.

Finally, this main page will serve as a blog of sorts, updating on the progress of recording, performances, composition and collaboration, all of which we are hoping to continue to make an active part of the existence of this group.

This will be the future home of Broadcloth, the new music and free improvisation trio from New Haven, CT. Content forthcoming.